Ancient and Eternal- the city’s motto fits perfectly. Also known as “the city of the seven hills” due to its location, Plovdiv is the second largest city in Bulgaria and in the top five oldest cities in the world.

It’s one of my favorite cities and last time I was here was the day after my 18th birthday; the day I fell in love with the way ancient and modern history blend in like it was meant to look this way even 5000 years ago. 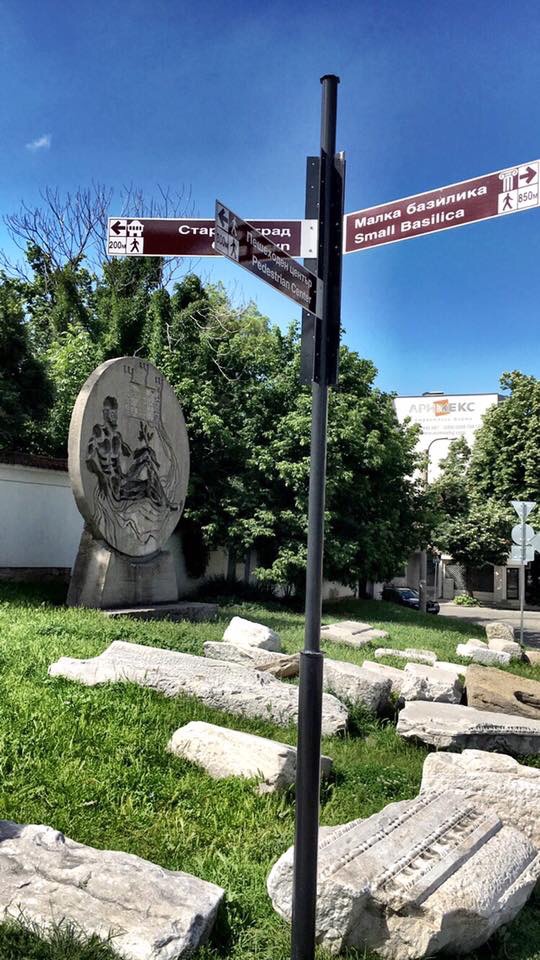 The city consists of two parts: old town and modern day Plovdiv. As you guys should know by now I’m a sucker for history, so I was quick to put on my walking shoes and “get lost” in the most ancient part of the city.

Starting at the East gate which still has the original pavement from over 6000 years ago when the area was part of the Roman Empire. The East gate was the shopping district, housing only the wealthiest families with the road, leading to the amphitheater and the coliseum up the hill.

Crossing the modern day road, I climbed my first hill, a gorgeous blend between the ancient roman road(5000 yo), Turkish Empire castle walls (built in the 15th century) and the 150 year old post slavery houses. 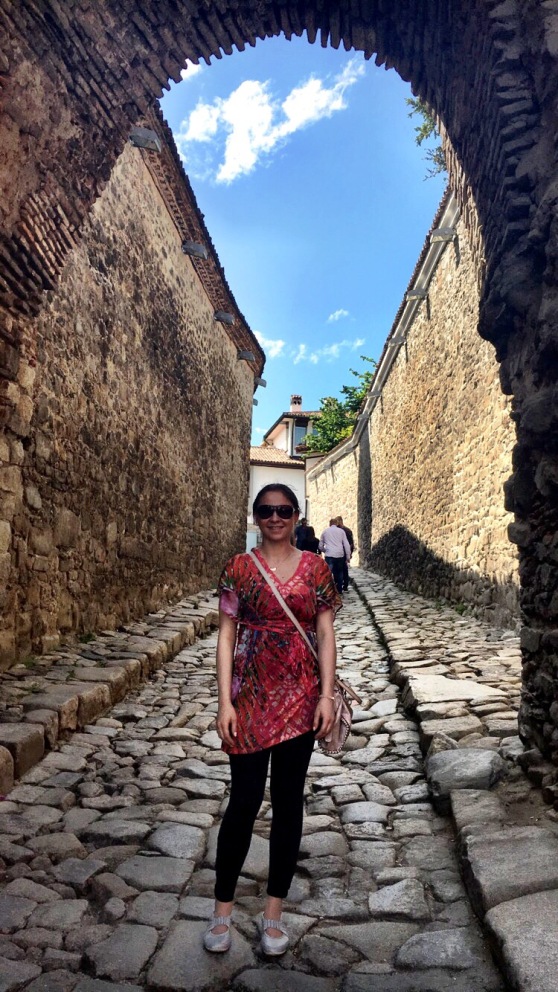 Continuing up, I have to note my favorite feature about post-slavery houses from the beginning of the 20th century. You will notice on the pic below how one part of the house is constructed outward- a traditional Gossip room. What is that you ask?- after about 500 years of slavery, the Bulgarian aristocracy was fast developing. The socialites spent their days drinking tea and coffee in said rooms, keeping track on everything happening below them on the then Main Street of Plovdiv, who was spotted with whom, the works. A whole room designed exclusively for a vintage (or maybe original is the word), Gossip Girl!

We reached our destination- Nebet Tepe.

Believed to be a magical place, not just because of the view. This hill is said to be a sacred ground for ancient Thracian tribes, who enhabited Bulgaria 7000-8000 years ago. It’s believed the goddess Hekate preformed rituals here so the place is loaded with positive energy. Another theory states that’s the whole reason ancient Romans chose it as the main fortress in the area. 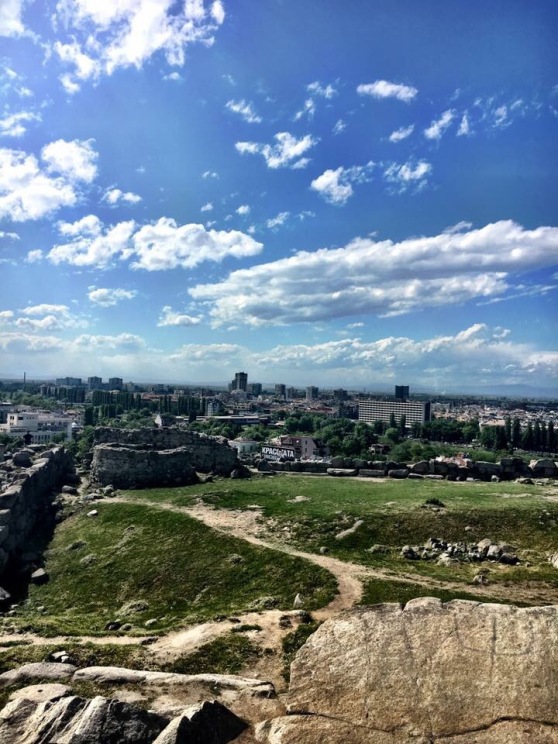 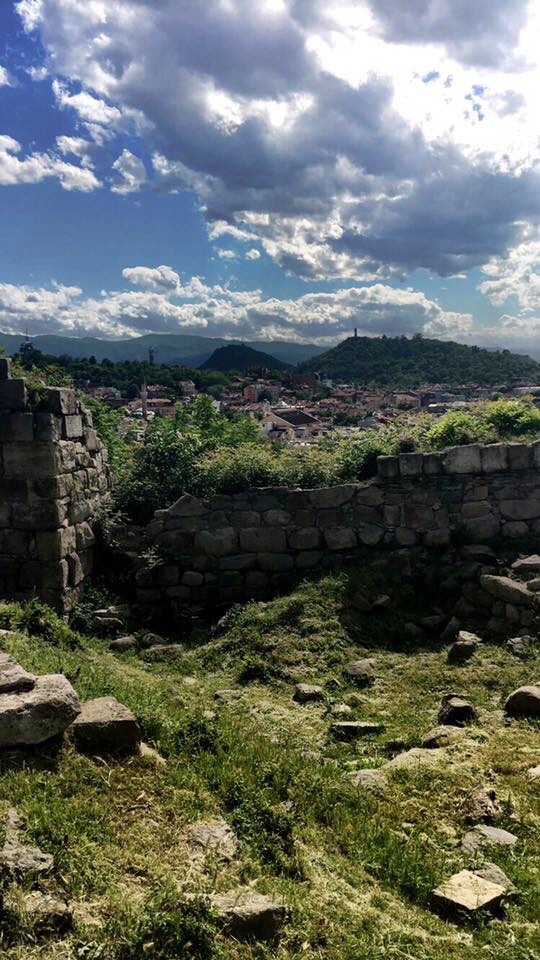 Tunnel entrance, dating back to Roman times, believed to be a part of an underground tunnel system, spreading throughout Europe

Just a few blocks up another hill, one can find the magnificent amphitheater, still performing over 5000 years after it was originally built. The entrance is only €5 per person and it’s an absolute must-see! 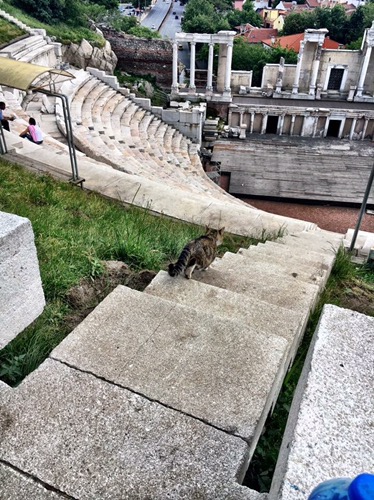 Our guide was a local ❤️ 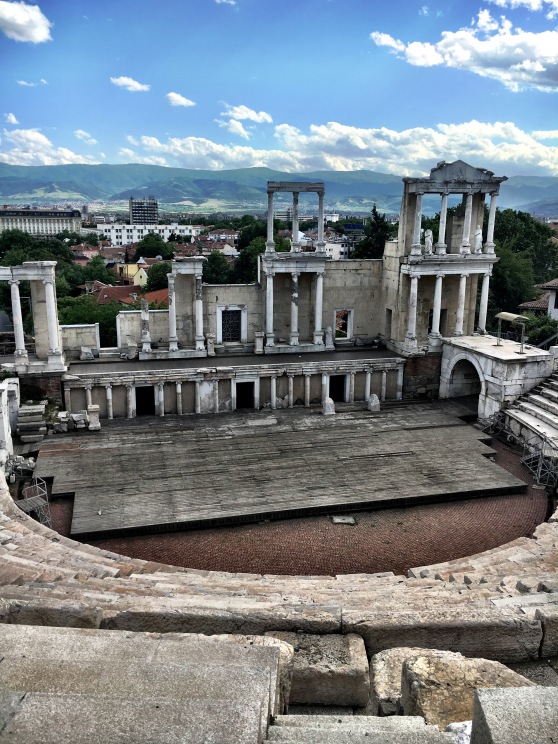 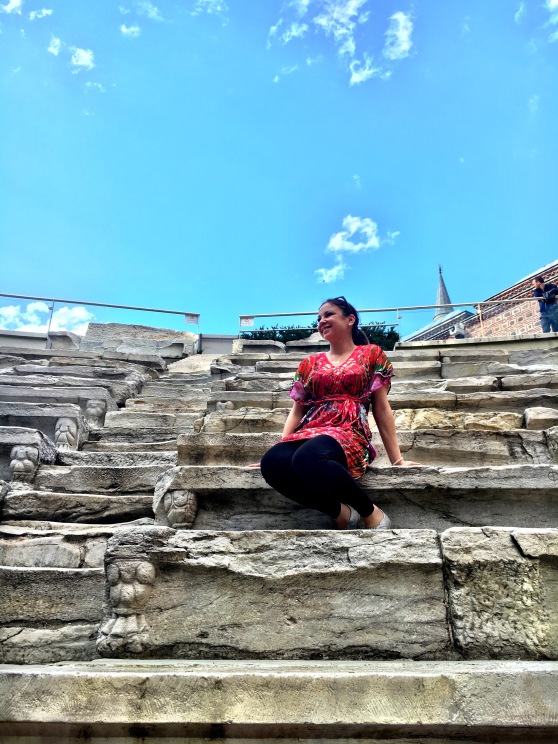 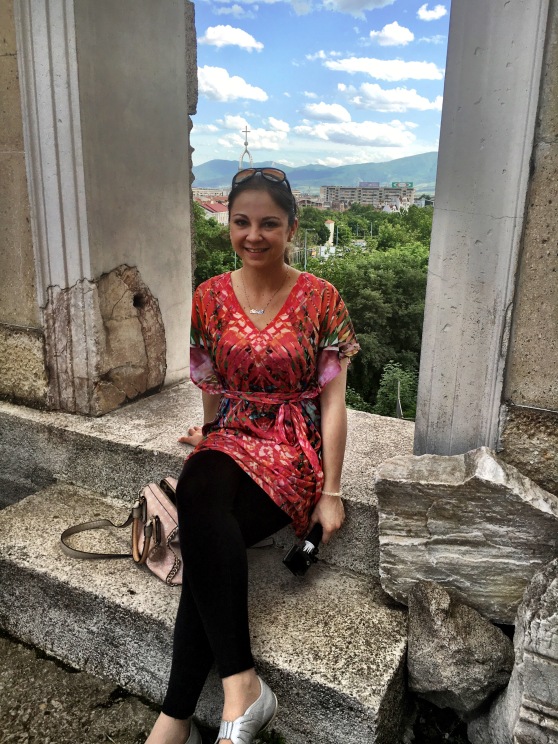 Another fabulous street down before the majestic Coliseum: 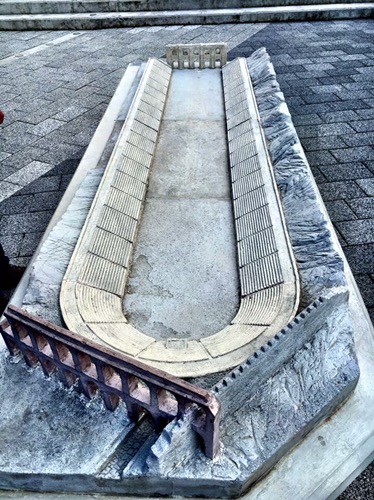 Such a small part remains, yet it’s still so easy to feel the excitement as you walk the tunnel passage leading to the battle grounds. Even the bravest warriors must have paused for a second, hearing the crowd’s roars louder and louder.

Once you are up the steps and you look ahead, you get an instant “slap” back into present day times. Welcome to downtown Plovdiv, the shopping district!

There are still quite a few places I didn’t manage to cover in this visit but I’ll definitely be coming back here!

There are cats EVERYWHERE! Adding a little extra to the Roman vibe ❤️ 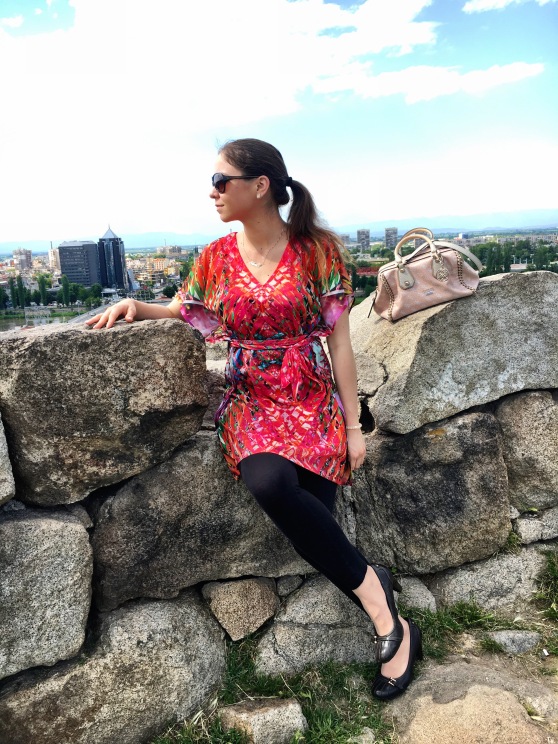 Saturday morning, 8 am and yours truly is third in line at Starbucks.. In Friday morning’s casual office look! The only difference between me and the two ladies in front- I didn’t look like it! No heels over my shoulder, no smudged mascara. Ignoring the voice of shame in my head, I was kinda proud of myself.

The naked truth is, I wasn’t going planing on a crazy night. The original plan was a double date at the end of a long week. Somehow it turned into a quick visit to my favorite bar. It wasn’t one drink and two hours later, I found myself posing in the middle of the street on the way to my favorite club. 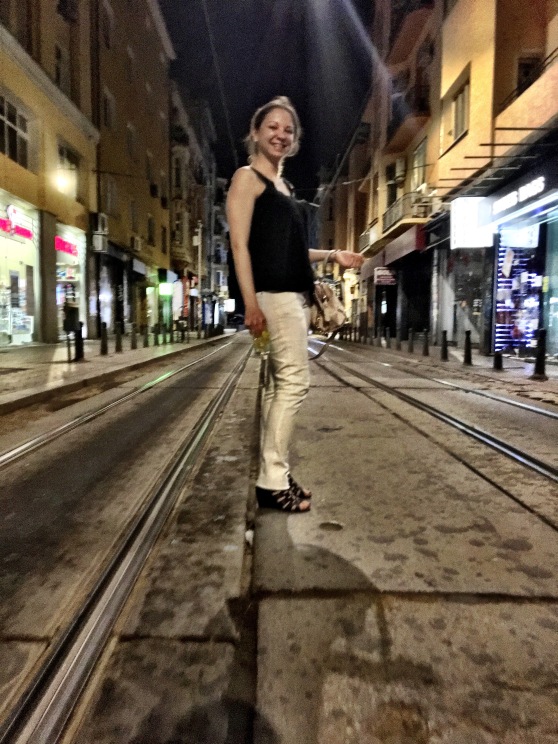 I had so much fun, ended up dancing the night away and for a first time in a while, I closed the club down at 7 something in the morning 😂

I thought my walk of shame is leaving the club at such an hour in yesterday morning’s attire. Then I realized, I don’t blend in with the parade of pale faces in tight dresses and messy hair! I managed to leave the house looking perfectly acceptable for a casual Friday at the office, partying all night and still looking like a workaholic on Saturday morning!

On the way to Starbucks I took another pic, just to have a base of comparasent: 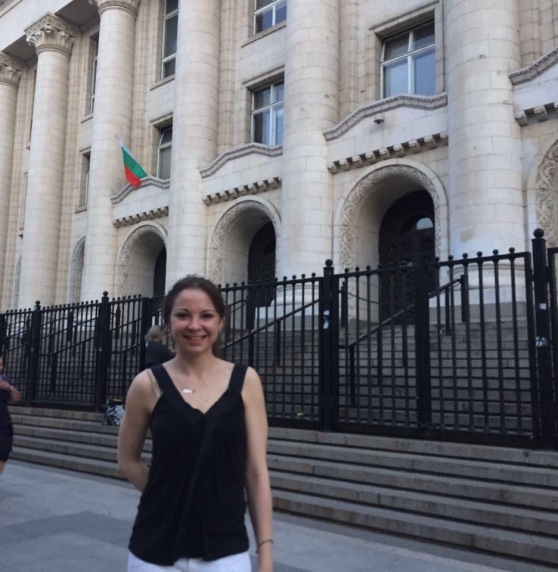 The secret to my look: a good concealer and the right tinted moisturizer, combined with a waterproof eyeliner and mascara. Don’t forget to drink 200 ml of water for every drink you have throughout the night! 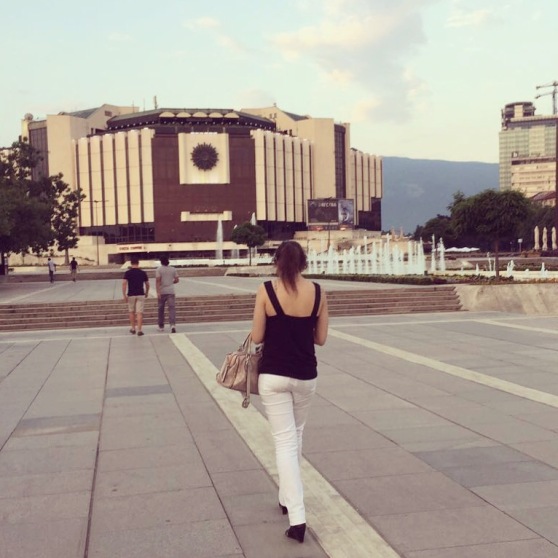 Festivals of all sorts have been dominating the last few summers as the It thing to do. I know I can’t be the only one who is sick and tired of denim cut offs and a faded *insert 70’s band name here* tee. If you plan on spending the day and/or night on a blanket in the grass and sipping wine from a plastic cup, a cocktail dress and heels ain’t gonna cut it.

Move over cocktail slip on , there’s a new dress in town!

They say maxi dresses and skirts are making a comeback this year since they dominated the Spring runways. But did they ever really leave? From the 90’s when maxi dresses became every beach babe’s must-have till now, dominating the street style scene. The perfect length is around the ankles or gently touching the floor, as middies can be unflattering. You can’t go wrong with a daring slit or a flirty back, in a bright statement color or a gentle pastel. My personal obsession; colors and patterns mixed at random but matching perfectly.

This last weekend I had a blast at the A to JaZZ Festival here in Sofia. I wore a gorgeous Charlotte Russe maxi dress with rose gold Nine West sandals and earrings, Esprit bag and my favorite name necklace in white gold.

Put your hair up in a bun, relax and enjoy the music. Clean, bright or gypsy chic, the maxi dress is here to stay!

Welcome to your monthly Insta update! June was a very eventful month for me, so there’s a lot to catch you up on.

I kicked off by celebrating my birthday. My s/o completely outdid himself this year! It all started in the morning when I found the gorgeous Zara dress I was eyeing a week prior, carefully placed on the freshly made bed, paired up with cute statement heels from Bershka. The day progressed with family time and more gifts, followed by a surprise party, attended by my dearest friends currently in the city❣I felt truly special and it was my best adult birthday so far!

The day after my birthday, I celebrated 5.5 year anniversary with my s/o which was another unforgettable evening!

A week later I was surprised by a dear friend who flew from the U.S. to visit me. Highly recommend some girl time matched with fabulous outfits!

This month I didn’t have to travel as much so I had the opportunity to cook more and invest some time into developing our YouTube channel, the link to which will be posted soon so stay tuned!

The second part of the month was just as amazing. I got the oportunity to help and participate in Pride Bulgaria. Sadly, the LGBT community in Bulgaria still faces discrimination and challenges on daily bassis, so I believe it’s truly important to support events like Pride, regardless of your personal sexual preferences. Meeting the fabulous Elza Parini was just an added bonus!

The following weekend I spent the day with my dad and spoiled him a little with Queen feat. Adam Lambert concert tickets for Father’s Day!

I also got to experience virtual reality for a first time and that was quite surreal!

Welcome to the month of pools, beaches, icy drinks and long warm nights!

In July, I’ll be focusing on festival fashions and trends, the return of my weekly recipe section and the little things that make us smile! Follow me on Instagram and Snapchat (@SilviaMelange) for daily good vibes and updates.

Are you ready to have fun?!